Winter Solstice: Facts on Shortest Day of the Year 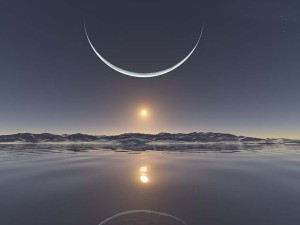 Why winter starts today, and the solstice’s Christmas connection.

An Iranian fruit seller calls for customers during Yalda, a celebration marking the winter solstice.

Today is the winter solstice and the first day of winter in the Northern Hemisphere. It’s all due to Earth‘s tilt, which ensures that the shortest day of every year falls around December 21.

But the winter solstice isn’t all about astronomy.

Since ancient times people have marked the winter solstice with countless cultural and religious traditions—it’s no coincidence the modern holiday season surrounds the first day of winter.

Solstice in Space: Astronomy of the First Day of Winter

“Solstice” is derived from the Latin phrase for “sun stands still.”

That’s because—after months of growing shorter and lower since the summer solstice—the sun’s arc through the sky appears to stabilize, with the sun seeming to rise and set in the same two places for several days. Then the arc begins growing longer and higher in the sky, reaching its peak at the summer solstice.

The solstices occur twice a year (around December 21 and June 21) because Earth is tilted by an average of 23.5 degrees as it orbits the sun—the same phenomenon that drives the seasons.

During the warmer half of the year in the Northern Hemisphere, the North Pole is tilted toward the sun. The northern winter solstice occurs when the “top” half of Earth is tilted away from the sun at its most extreme angle of the year.

Being the shortest day of the year, the winter solstice is essentially the year’s darkest day, but it’s not the coldest.

Because the oceans are slow to heat and cool, in December the seas still retain some warmth from summer, delaying the coldest of winter days for another month and a half. Similarly, summer doesn’t hit its heat peak until August, a month or two after the summer solstice.

(See “Earth at Farthest Distance From Sun—Why the Heat Wave?”)

Throughout history, humans have celebrated the winter solstice, often with an appreciative eye toward the return of summer sunlight.

Massive prehistoric monuments such as Ireland’s mysterious Newgrange tomb (video) are aligned to capture the light at the moment of the winter solstice sunrise.

Germanic peoples of Northern Europe honored the winter solstice with Yule festivals—the origin of the still-standing tradition of the long-burning Yule log.

The Roman feast of Saturnalia, honoring the God Saturn, was a weeklong December feast that included the observance of the winter solstice. Romans also celebrated the lengthening of days following the solstice by paying homage to Mithra, an ancient Persian god of light.

Many modern pagans attempt to observe the winter solstice in the traditional manner of the ancients.

“There is a resurgent interest in more traditional religious groups that is often driven by ecological motives,” said Harry Yeide, a professor of religion at George Washington University. “These people do celebrate the solstice itself.”

(Related: Get Stonehenge facts and pictures in National Geographic magazine.)

In a number of U.S. cities a Watertown, Massachusetts-based production calledThe Christmas Revels honors the winter solstice with an annually changing lineup of traditional music and dance from around the world.

“Nearly every northern culture has some sort of individual way of celebrating that shortest day,” said Revels artistic director Patrick Swanson. “It’s a lot of fun for us to dig up the traditional dance and music and even the plays [honoring] that time of the year.”

Of course, as the name suggests, The Christmas Revels mix ancient winter solstice traditions with customs of the holiday that largely replaced winter solstice celebrations across much of the Northern Hemisphere: Christmas.

Scholars aren’t exactly sure of the date of Jesus Christ’s birthday, the first Christmas.

“In the early years of the Christian church, the calendar was centered around Easter,” George Washington University’s Yeide said. “Nobody knows exactly where and when they began to think it suitable to celebrate Christ’s birth as well as the Passion cycle”—the Crucifixion and resurrection depicted in the Bible.

Eastern churches traditionally celebrate Christmas on January 6, a date known as Epiphany in the West. The winter date may have originally been chosen on the basis that Christ’s conception and Crucifixion would have fallen during the same season—and a spring conception would have resulted in a winter birth.

But Christmas soon became co-mingled with traditional observances of the first day of winter.

“As the Christmas celebration moved west,” Yeide said “the date that had traditionally been used to celebrate the winter solstice became sort of available for conversion to the observance of Christmas. In the Western church the December date became the date for Christmas.”

“This gave rise to an interesting play on words,” Yeide said. “In several languages, not just in English, people have traditionally compared the rebirth of the sun with the birth of the son of God.”

Uncategorized
Ever Wonder Why Bad Things Happen To You
What if the Bible is Correct Concerning Judgment?

This site uses Akismet to reduce spam. Learn how your comment data is processed.